For years, corporate reporters — those inside companies responsible for creating sustainability reports and reporting environmental, social and governance data to various other organizations — have been frustrated by what many refer to as an alphabet soup of standards and frameworks: CDP, GRI, IIRC, PRI, SASB, TCFD, UNGC and more.

And while they grumbled at how those various organizations’ requests weren’t harmonized, they dutifully complied with their requests and mandates.

Finally, help may be on the way.

Today, two of those organizations — GRI, formerly the Global Reporting Initiative, and the Sustainability Accounting Standards Board, better known as SASB — are announcing a collaborative effort to help ease that confusion and, not insignificantly, position their standards as the most consequential.

“Our basic SASB 101 pitch that we give to everyone we speak to talks about SASB and GRI as being complementary, but we never could break through into the public sphere with that message,” SASB CEO Janine Guillot told me. “It was always this conflict narrative, which was extremely frustrating.”

The “conflict narrative” wasn’t without foundation. For years, the two organizations competed for attention and dominance among corporate reporters, NGOs and the mainstream investor community. Sometimes it got contentious. For example, at a sustainability reporting conference in Singapore last fall, the CEOs of GRI and SASB “traded barbs over whose was the superior standard,” according to one report — a “showdown,” as sustainability reporting expert Elaine Cohen called it.

For years, the two organizations competed for attention and dominance. Sometimes it got contentious.

At the event, SASB’s then-CEO Madelyn Antoncic called GRI too difficult for investors to understand and for companies to compare their performance with peers. GRI CEO Tim Mohin pointed out that its standard is used by 75 percent of the world’s largest companies. “With those numbers, I don’t see how what SASB is saying can be true,” he said.

But that was so last year. SASB has a new CEO — Guillot — who joined SASB five years ago after a decade on the investing side with Barclays and CalPERS, and who came to her CEO job with a strong working relationship with Mohin. Now, the two are in lockstep — baby steps for now — to help the customers of sustainability data “understand the similarities and differences in the information created from these standards,” according to a joint briefing document.

The time may be ripe for such a collaboration, for several reasons. One is the growing focus on sustainability and environmental, social and governance (ESG) metrics by the mainstream investment community, creating a greater need for a set of dominant standards to emerge. If there was any question about this trend, BlackRock CEO Larry Fink cast away all doubts in his annual shareholder letter, which referenced SASB and TCFD, the reporting framework created by the Task Force on Climate-related Financial Disclosures.

Such harmonized metrics are needed even within companies, where sustainability departments are communicating with far more stakeholders.

“You’ve got a much broader base of people who are interested in talking about these topics, coming from a much broader array of disciplines,” said Mohin, including “an investor relations person, a corporate secretary, a general counsel, a financial controller, a marketing communications person and an HR person. All of a sudden, you’ve got to bring together these multidisciplinary teams within both companies and investors. And that goes all the way up to the board, since boards of directors are now interested in these topics.”

Of course, outside the corporation is another small army of interested groups — customers, employees, regulators, etc. — seeking easily understood and comparable data about companies’ sustainability performance.

And then there’s COVID.

“If the COVID-19 pandemic has showed us anything, it’s that nonfinancial disclosure is very meaningful from a global financial standpoint, and that the concept of what is financially material and what is considered not financially material is a very dynamic thing,” Mohin explained. “We went from the issues that are important in a pandemic being sort of down the list to being front and center overnight. And now we have the issues of racial justice and inequality front and center. We’ve seen how the events of the world can change that definition for a company very, very quickly, which I think is one of the very important messages here of why GRI and SASB need to work together.”

The pandemic has put into sharper focus a number of aspects of corporate performance, including business contributions to biodiversity loss and the resulting increased potential for disease outbreaks; and the need for more resilient supply chains, especially for essential goods such as food and medicine, as Guillot pointed out recently on GreenBiz.

For now, the two organizations’ work together will focus on going into the marketplace with harmonized, complementary messages. One goal, Mohin said, is to “understand how the different standards are used by companies. And then take the next step, which is to show in practice companies that are using both standards.”

Another goal is to “demonstrate with real live companies who are reporting to both sets of standards how the companies are doing it, why they’re doing it and what kind of information each provides for stakeholders,” Guillot said. She also suggested the possibility of doing some “mock disclosures,” pulling together best practices from across multiple companies.

For now, the two organizations’ work together will focus on going into the marketplace with harmonized, complementary messages.

Beyond that is a world of other collaboration possibilities, about which neither Mohin nor Guillot would speculate.

Can the GRI-SASB hookup change the game? Mike Wallace thinks so. Wallace — who ran GRI’s North America operation from 2009 to 2014, and who remains laser focused on reporting standards and ESG ratings methodologies in his role as a partner at the consultancy ERM — believes that greater collaboration could especially help those just beginning the reporting “journey.”

“It is a confusing space for new entrants when one considers the various options, requests and suggestions for how to address the growing demand for ESG information,” he told me, citing “at least a half-dozen disclosure options.”

“We are regularly integrating a range of the frameworks, guidelines and standards together for clients,” Wallace added. “For those companies that are just getting started, the GRI and SASB collaboration will be greatly appreciated.”

True, we’ve seen this movie before. The two organizations have long discussed the opportunities for collaboration. Two years ago, we reported on a Bloomberg-funded effort to bring the GRI and SASB standards “in line with each other wherever possible.”

And then there’s the proposed reporting framework announced in January at the World Economic Forum’s annual conference in Davos. Created by WEF’s International Business Council in collaboration with the Big Four accounting firms and endorsed by the CEOs of 140 large companies, it recommends a set of core metrics and disclosures “to be reflected in the mainstream annual reports of companies on a consistent basis across industry sectors and countries.”

But it doesn’t exactly see doing away with SASB, GRI and their kin. As reported by the Financial Times, the WEF framework “takes inspiration from existing disclosure frameworks such as SASB, the Global Reporting Initiative and the TCFD and will also include the EU’s new taxonomy that defines green instruments.”

Confusing? It seems harmonization and simplification of corporate sustainability reporting may still be a ways off.

Still, the SASB-GRI announcement is promising. Both organizations believe that transparency — and particularly performance metrics and comparable information — lead to improved societal outcomes.

Said SASB’s Guillot: “If financial and nonfinancial stakeholders have access to information and can compare company performance on issues, then our theory of change is that companies will compete to improve performance and that at the end of the day leads to improved sustainability outcomes.”

Which is, after all, the point.

I invite you to follow me on Twitter, subscribe to my Monday morning newsletter, GreenBuzz, and listen to GreenBiz 350, my weekly podcast, co-hosted with Heather Clancy. 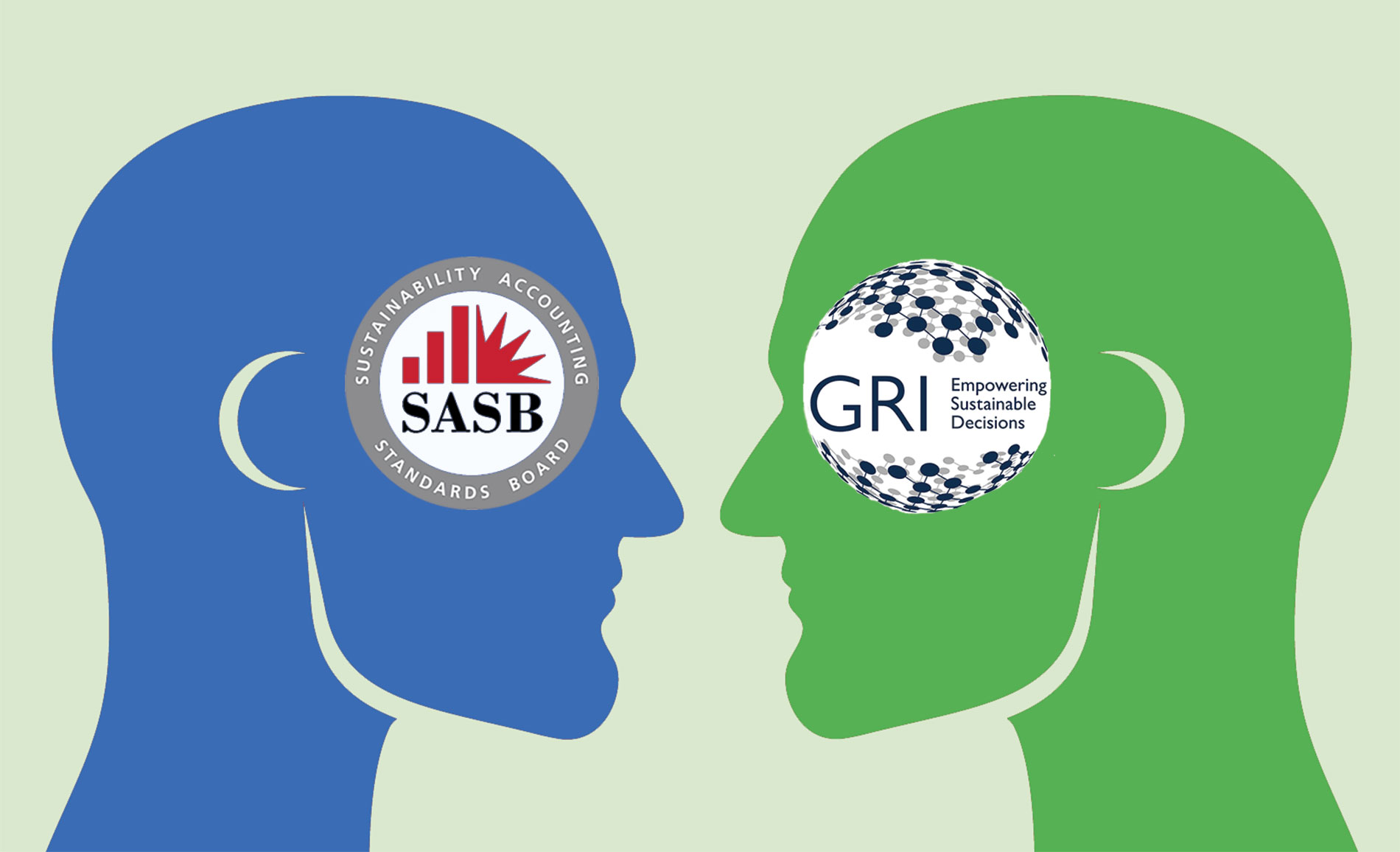 Read more about this at: greenbiz.com

FDA Cracks Down on CBD Oil

FDA Cracks Down on CBD Oil