LinkedIn Lead Gen Forms have become a critical piece of B2B marketing campaigns. And for good reason: They’re easy to set up. They allow for self-serve micro-targeting of more than 600 million users. And—thanks to pre-filled data—they tend to convert well.

What’s not to love?

But before you run over to LinkedIn and mash that Advertise button, we should talk. LinkedIn Lead Gen Forms are a great marketing tool, but they’re not foolproof. In fact, if you set up your campaign the wrong way, you’re probably not going to see ROI. (Since everything has to be jargon, that’s ROAS, or return on ad spend.)

In this post, we’re going to break down some best practices for LinkedIn lead generation strategy. We’ll cover campaign setup and creative, then dive into tips and tricks for maximizing the value of your leads.

In traditional native ads, a user heads to a landing page after clicking a call-to-action. With LinkedIn Lead Gen Forms, they see a pre-filled form right in their feed. All they need to do is click Submit.

The effect is less friction for the prospect. If they want your content or a demo, it’s one click, rather than a trip off-site. That means more conversions—which is a good thing.

The not-so-good thing is that LinkedIn advertising can be expensive. The cost-per-click (CPC)—what you pay if a user engages with you—can be $6 or higher. Facebook—which, granted, has much less precise B2B data—is often below 50 cents. Google Display ads—again, less precise than LinkedIn—typically have CPCs around $1.

That means you need to run your LinkedIn campaigns efficiently to get a positive ROAS. Here’s how you can build a high-performing campaign.

Setting up your LinkedIn campaign

The first step in building a LinkedIn ad campaign is campaign setup. (We’ll get to your ad and form in the next section.) You start by picking your campaign objective. To use LinkedIn Lead Gen Forms, pick Lead generation.

Next, you build your audience. LinkedIn makes this simple. You can winnow down users based on:

Don’t make your audience too small, or target only the C-suite. A key to LinkedIn advertising is casting a wide, but relevant, net. Everyone wants to “sell straight to the CEO.” That means those clicks will be expensive. Get creative. Who else can serve as a gatekeeper?

Pro tip: If you’re going to run multiple campaigns to the same audience, click Save as template to reuse your targeting later. 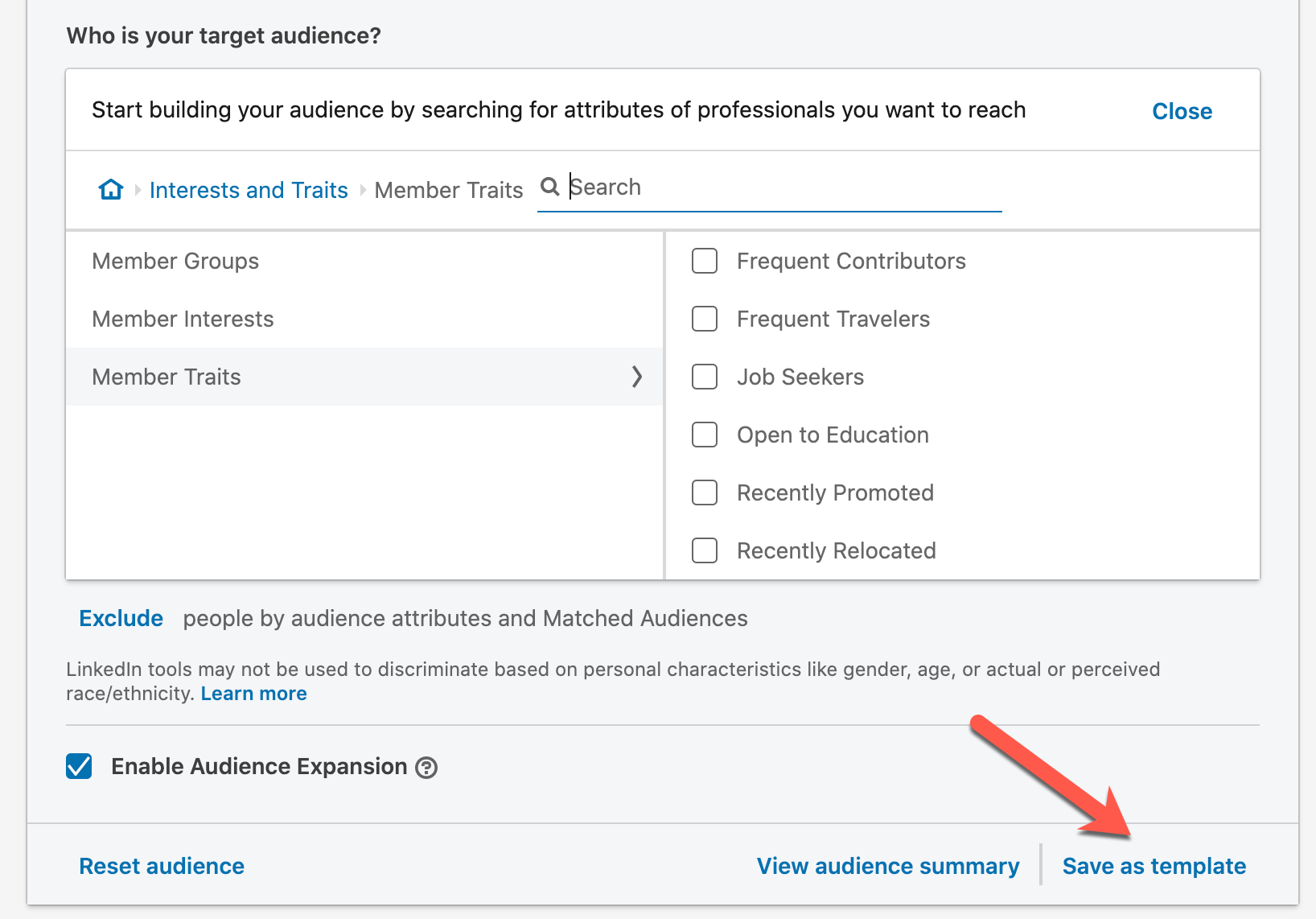 Now, you’ll pick your ad format. The most common is a single image ad—that’s most of what you see in your LinkedIn feed. You can also use an image carousel, show a video, or deliver messages right to targets’ Messenger inbox.

The next section down is Placement. Skip this if you’re using LinkedIn Lead Gen Forms.

Finally, you’ll set your budget and schedule. This is exactly what it sounds like.

Here’s the part where you get creative: it’s time to build your ad.

This will be different depending on the format you chose, but here are some best practices to keep in mind:

Be eye-catching but relevant. You don’t want users to scroll right past your ad. But you also don’t want junk clicks. Those cost money! So keep your message and image on-point.
Put your most important information first. Ads can get truncated, so don’t bury the lede.
Come up with a naming convention for your ads (and forms and campaigns). You’ll thank me when you can find what you’re looking for later.

The last step before your campaign goes live is your LinkedIn Lead Gen Form itself. Just like the ad, this is a simple builder. Fill in the fields, and you’ll see a preview right there. 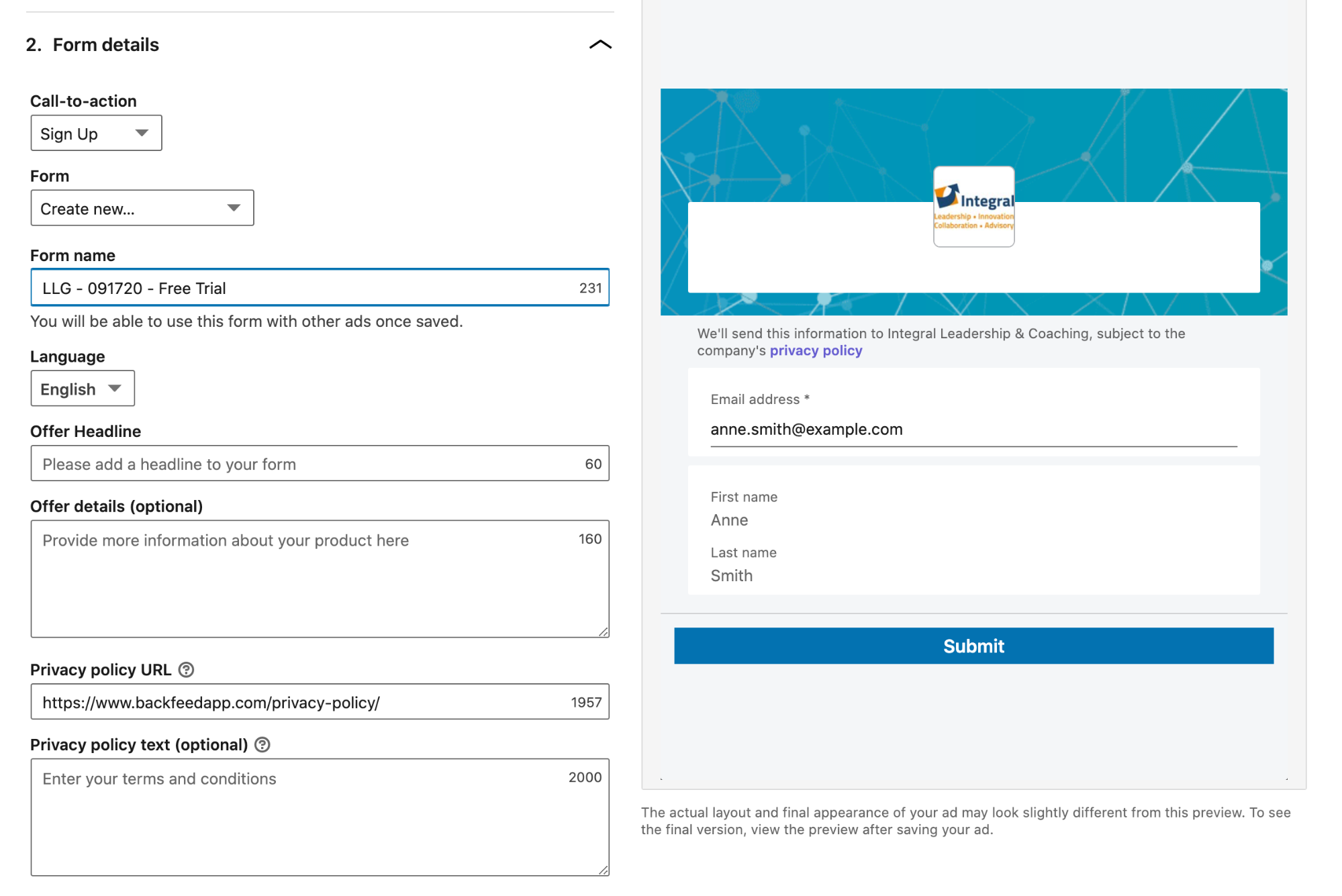 You can capture LinkedIn information, which will be pre-filled in the form. You can also add up to three custom questions and five custom checkboxes (mostly for opt-ins). Hidden fields are available, too, which can come in handy if you add automations.

Making the most of your LinkedIn leads

You’re now advertising to a targeted audience on the most popular business networking platform. And if you paid attention to some of the tips above, you’ve got a chance at a profitable campaign. But once you’re done patting yourself on the back, stop and think for a second: when users fill out your LinkedIn Lead Gen Form, what’s going to happen?

Out of the box… nothing. By default, you’re going to have to export your leads manually. And remember: these leads aren’t cheap. You don’t want to make them wait for their content, demo, or chat.

The answer is automation.

LinkedIn offers several native integrations to big CRMs and marketing automation platforms. If you just want to drop your leads in HubSpot, for instance, there’s no need to get fancy. But if your needs are custom or complex, you can use LinkedIn Lead Gen Forms’ Zapier integration.

LinkedIn Lead Gen Forms are a great way to capture B2B leads. But they’re not cheap to use. Sloppy campaign setup or slow follow-up can torpedo your ROAS. Focus on best practices and automation to make the most of your spend.

Read more about this at: zapier.com