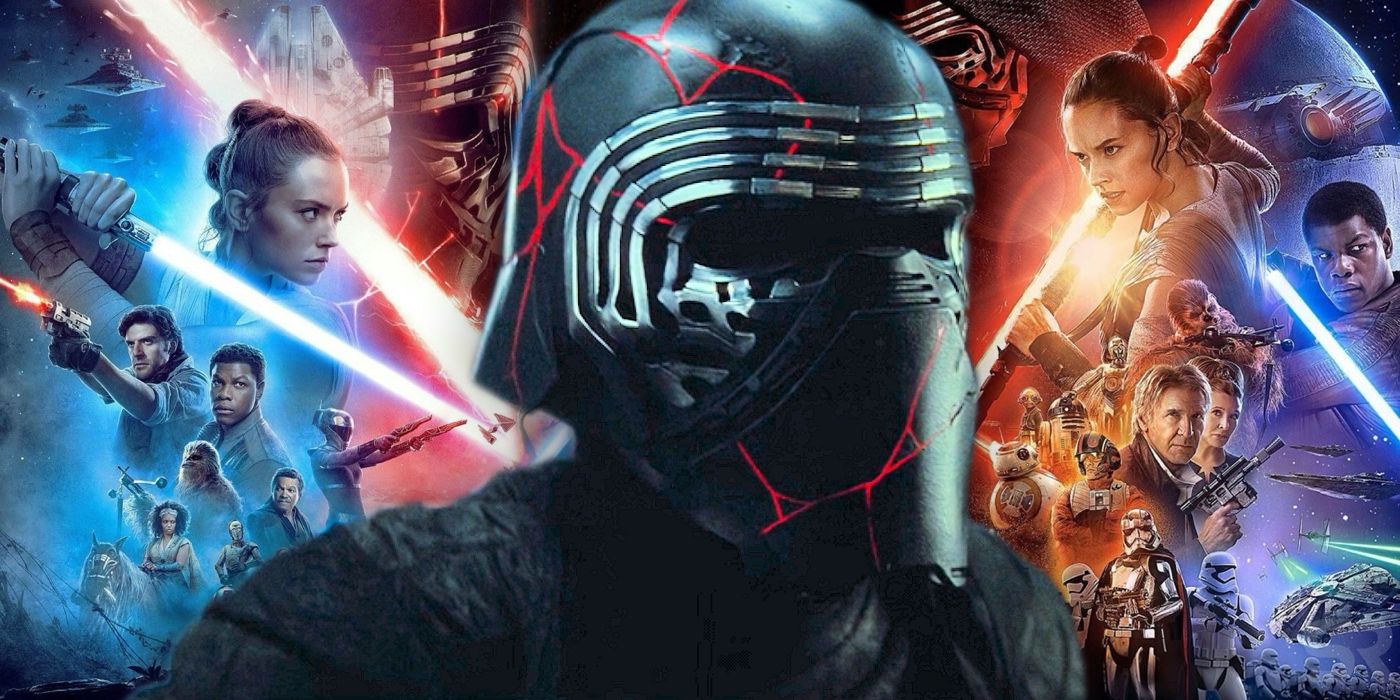 Kylo Ren was Lucasfilm’s biggest success in the Star Wars sequel trilogy. The Star Wars franchise has always been celebrated for the quality of its villains. Darth Vader is most the iconic Sith Lord, a looming force of evil whose mystique has only grown with time, and whose potential was finally displayed in Rogue One: A Star Wars Story‘s famous corridor scenes. Beyond Vader, though, the prequel trilogy introduced viewers to unforgettable foes such as Darth Maul and Count Dooku as well.

When Lucasfilm launched the Star Wars sequel trilogy, they knew they had a lot to live up to. They created Kylo Ren, deliberately modeled on Darth Vader, and marketing for Star Wars: The Force Awakens kept the secret of his true identity for the film’s opening night. Adam Driver’s villain soon became the co-star of the sequel trilogy, ultimately revealed to be one half of a mysterious ‘Force Dyad‘ with Daisy Ridley’s Rey.

The Star Wars sequel trilogy hasn’t exactly been an unalloyed success for Lucasfilm. Even George Lucas was unimpressed with Star Wars: The Force Awakens, Star Wars: The Last Jedi divided the fanbase, and Star Wars: The Rise of Skywalker was far too drastic of a course-correction to provide fans with a satisfying conclusion. For all that’s the case, though, Kylo Ren should be celebrated as one of the biggest successes of the sequels. 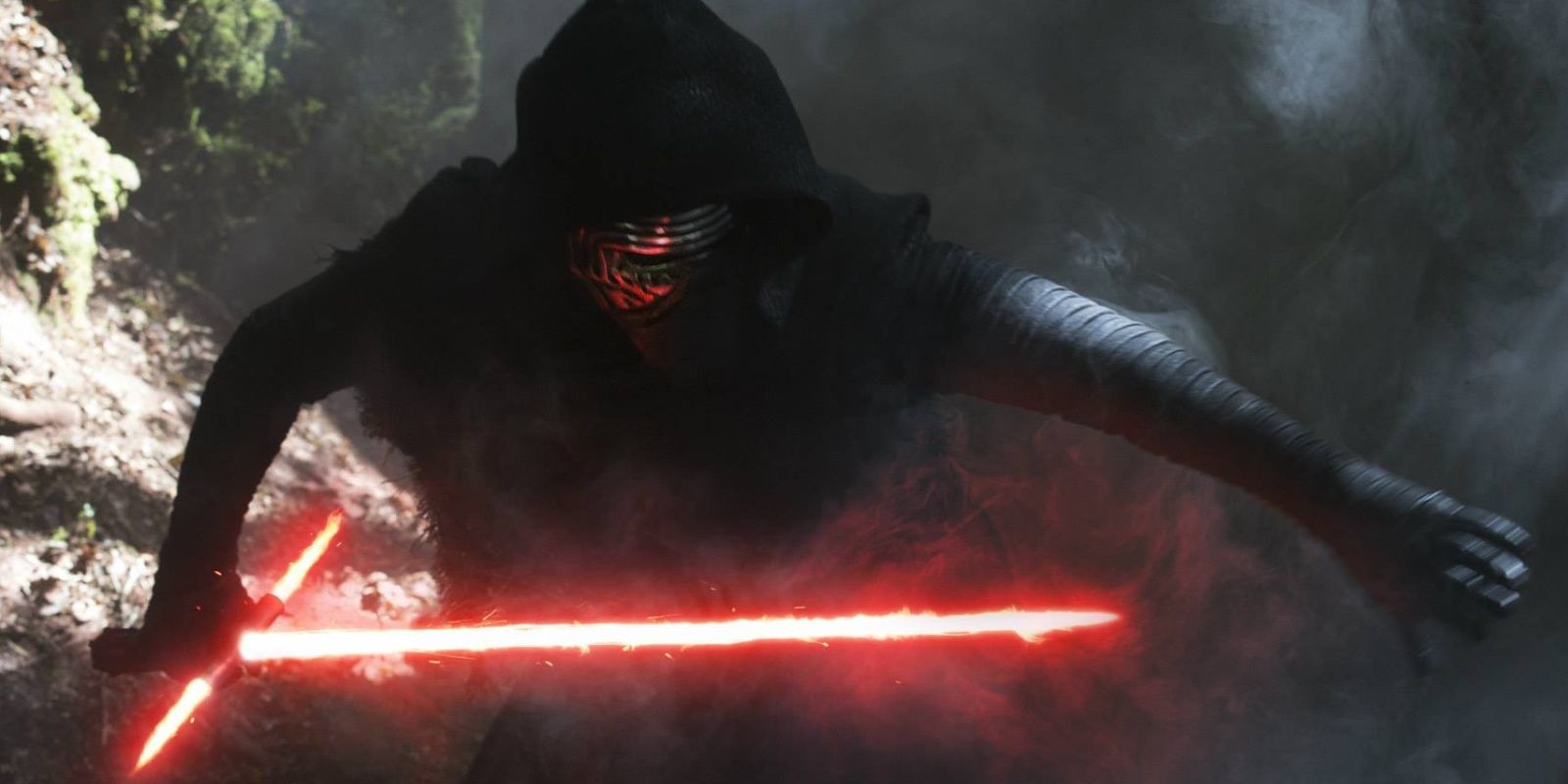 Kylo Ren makes his presence felt at the very beginning of Star Wars: The Force Awakens. At first he seems to have come out of nowhere; a powerful Force-sensitive person who is strong in the dark side, able to stop blaster bolts by sheer force of will. Visually, Kylo Ren is clearly styled on Darth Vader, right down to a sinister mask design, but his savagery – and the crackling lightsaber – also feels strangely evocative of Darth Maul. As the film progresses, director J.J. Abrams unmasks Kylo Ren, both literally and emotionally. The Vader design is revealed to be a deliberate homage, because Kylo Ren is really Ben Solo, obsessed with a twisted idea of his grandfather’s legacy.

As the sequels continue, Kylo Ren develops – and becomes a searing critique of both toxic fandom and toxic masculinity. He feels like a real, three-dimensional human being, and is disturbingly reminiscent of men in the real world who seethe with ill-directed anger and frustration. A surge of rage causes Kylo Ren to slash wildly at anything nearby with his lightsaber, and Stormtroopers retreat lest they find themselves victims of his ire; when he sees Luke Skywalker, he reacts with fear, and is so focused on the Jedi Master that he allows the remaining members of the Resistance to escape. Kylo Ren is a fundamentally flawed human being, no avatar of the dark side, but rather a complex and broken man.

The story of Kylo Ren’s descent into evil is told in a tie-in comic book series by Charles Soule, The Rise of Kylo Ren. Still, all you need to know is summed up in his attempt to seduce Rey to the dark side in Star Wars: The Rise of Skywalker, when he tells her to “surrender” to it. The word choice reveals just how Kylo Ren sees the dark side; where the Sith believe themselves masters of the dark side, Kylo Ren has been mastered by it. Succumbing to the dark side weakened him, turning him into a victim of his own poor choices. And yet the possibility of redemption always seems open to him, however blind he is to it. 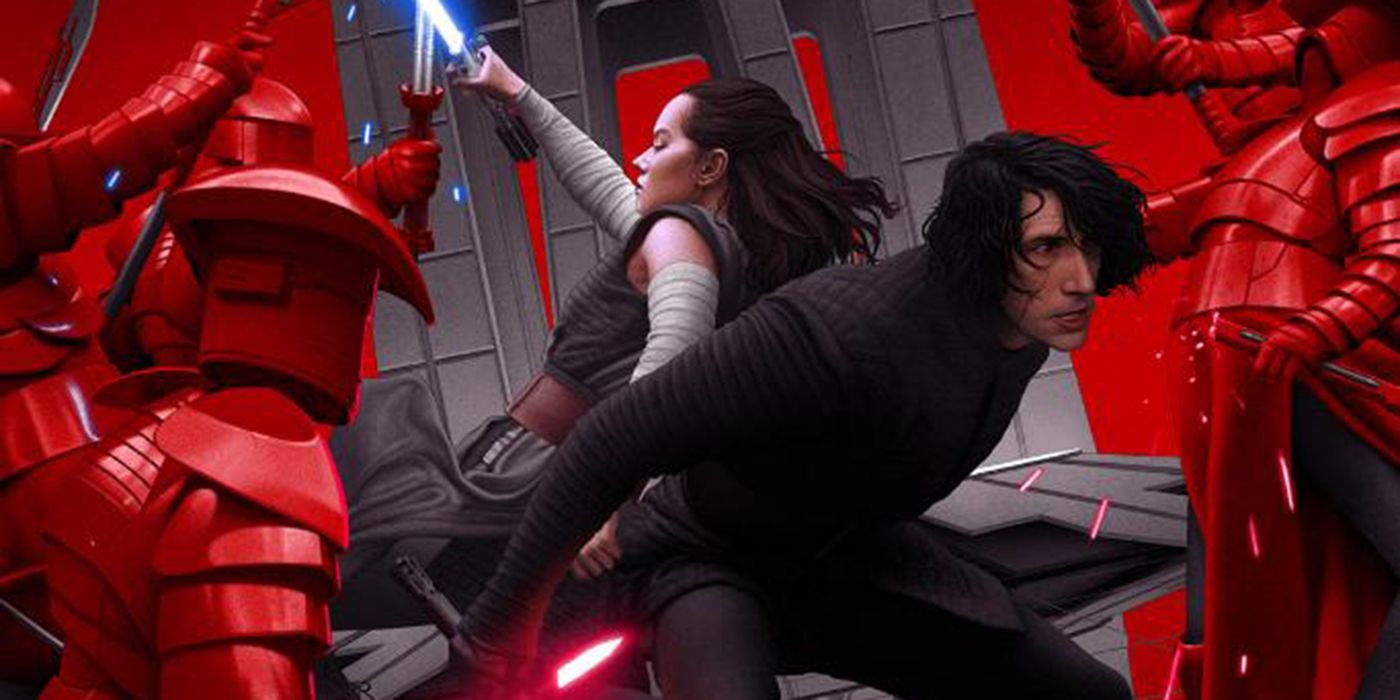 Kylo Ren’s character arc is one of the best, and most consistent, in the Star Wars sequel trilogy. He is a man who knows no peace, because his very soul is torn between the light side and the dark. His first real moment of choice seems to come in Star Wars: The Force Awakens, when his father Han Solo attempts to persuade him to abandon the First Order. Although Kylo Ren instead commits a horrific act of patricide, the sacrifice is spoiled because it is a willing one, the darkness tainted by the light of a father’s still-burning love. In desperation, Kylo Ren spends Star Wars: The Last Jedi proclaiming a new philosophy – to let the past die, preferably by killing it. And yet, for all that’s the case, he can’t bring himself to fire upon his own mother, and his fear overwhelms him when he sees an illusion of Luke Skywalker. By the end of Star Wars: The Last Jedi, Kylo Ren has become Supreme Leader of the First Order, and yet he has still failed to conquer his own heart. “You have world leaders who you imagine – or hope or pray – are living by kind of a higher code of ethics,” Adam Driver observed. “But it really all comes down to them feeling wronged or unloved or wanting validation.”

All this builds to a head in Star Wars: The Rise of Skywalker, when Kylo Ren is redeemed by three acts of love. His mother, Leia, uses the last of her Force energy to reach out to him; a final act that makes him realize he has been mistaken all these years when he believed she could never accept him as he is. Rey gives part of her own life energy to restore him. And then, finally, he remembers Han Solo, and reimagines their final conversation, understanding at last the love that burned within Han Solo’s heart. He abandons the mask and blade of Kylo Ren; but redemption isn’t cheap in Star Wars, and he pays a heavy price.

The sequel trilogy has many flaws, largely a result of a lack of planning on Lucasfilm’s part. For all that’s the case, though, the studio does seem to have had a general sense of where they were going with Kylo Ren all this time. According to Adam Driver, he knew the end of Kylo Ren’s journey – his redemption and death – right from the start. As a result, it should really be no surprise to see Kylo Ren has the most consistent arc in the sequel trilogy. He is the one handled the best by all the different writers and directors, simply because the course changed – but the destination did not. As a result, while many of the other characters are often bland and cipher-like, Kylo Ren’s path is remarkably consistent. 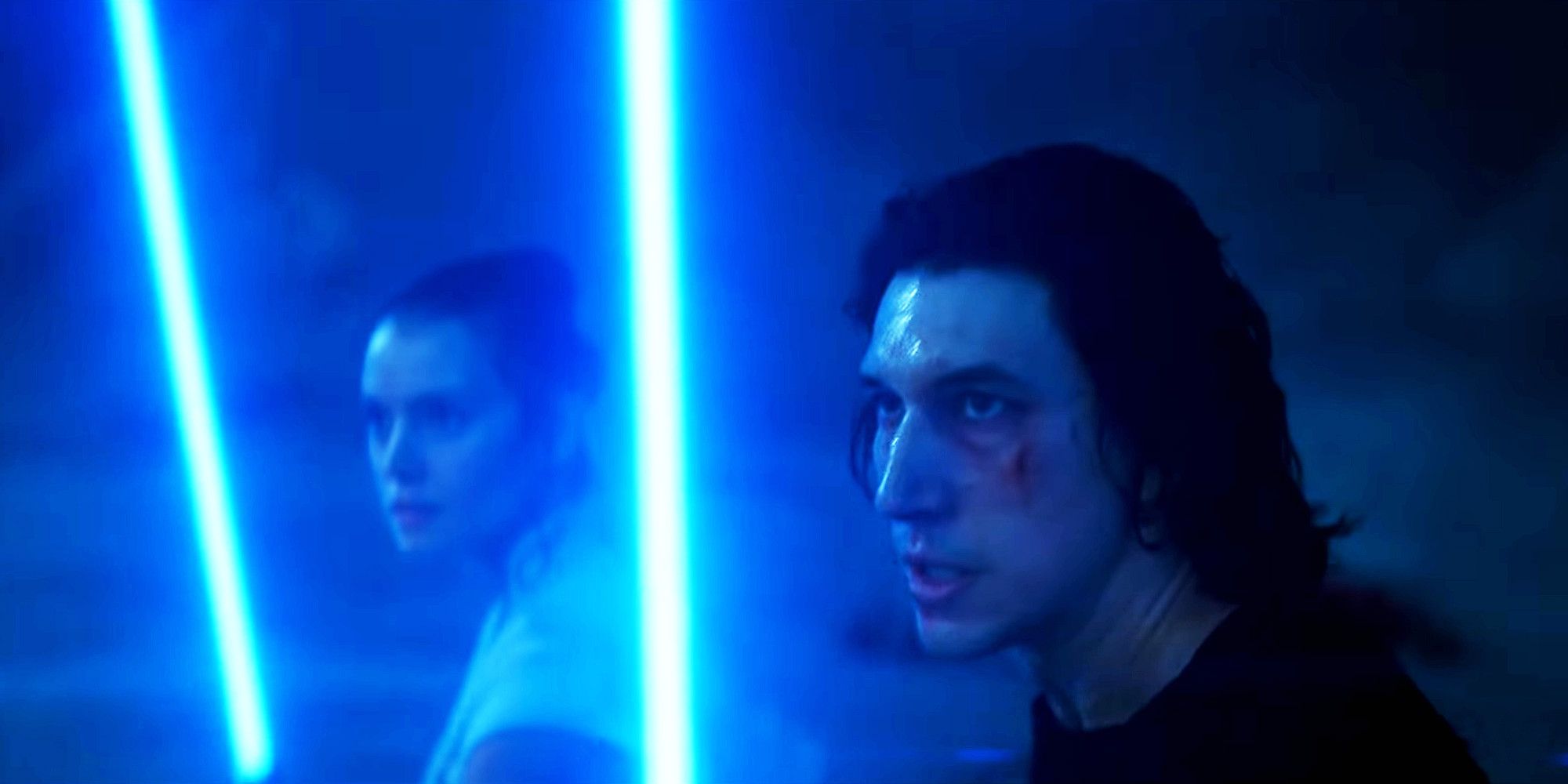 It helps that Adam Driver gives easily the best performance of the entire sequel trilogy. Granted, the scripts haven’t always given their stars a lot to work with, but Driver’s understanding of his character means he elevates every scene. He understands Kylo Ren in a visceral way; he gets his perspective, to the extent he’s even absent-mindedly described Han and Leia in terms Kylo Ren would be proud of – as “religious zealots.” Driver knows what makes Kylo Ren tick, and as a result he’s able to portray every aspect of a multi-faceted character. He switches from haughty, proud warlord to precocious, vulnerable child with ease, and still manages to make every aspect feel like the same person.

When Kylo Ren finds his peace as he stands on the ruins of the Second Death Star, Driver sells it. From that point on, he subtly adjusts Kylo Ren‘s body language, emphasizing the similarities between Ben and his father Han Solo; note the trademark Solo shrug during the battle with the Knights of Ren. Driver’s attention to detail essentially makes it feel as though Kylo Ren has been reborn as Ben Solo, the man he was always destined to be, even if only briefly. Ultimately, it is Driver’s skill as an actor that turns Kylo Ren into the biggest success of the Star Wars sequel trilogy.